ST CWYFAN CHURCH IN THE SEA

The church of St Cwyfan used to be part of the mainland; however, over the centuries erosion has left it aloof of the land.

There's been a church on this site since the 7th Century; the original being made of wattle and daub.

The church you see today only goes back to the 12th and 13th Centuries. On Anglesey, that's a newcomer.

Stand here in a storm and appreciate the religious dedication of those locals who would cross to the Island on wild winter nights.

A GENTLE WALK ALONG THE BEACH


HISTORY OF THE CHURCH IN THE SEA


THE SEA SHALL EMBRACE THEM

A GENTLE WALK ALONG THE BEACH

Anglesey today was beautiful if not gusty and St Cwyfan’s Church in the sea off Aberffraw was as good a place to be as anywhere else on Anglesey.

Sad to report that there was just of hint of Autumn in the air, though Summer is clinging on and it looks like it going to be a gloriously sunny August Bank Holiday.

I got into a conversation with one of the tens of thousands of visitors to the Island, a guy called Bob, a builder from Nuneaton. “And yes, they do call me ‘Bob the Builder’. I should have trademarked the name.”

The tide was out, as it is twice every 26 hours and St Cwyfan’s was approachable across the beach and what remains of the boulder-strewn causeway.

Bob told me that he and his wife were Christians and that she had gone ahead to attend the service in the church. I understand that although the services are sparse they are regular. I wondered how many people would be in attendance.

Maybe the novelty would bring aged locals and visitors like Bob’s wife.

To my delight, the church was full and I could hear the sound of the Hymn, "For those in Peril on the Sea' (William Whiting) issue forth.

Eternal Father, strong to save
Whose arm hath bound the restless wave.
Who bidd'st the mighty ocean deep
Its own appointed limits keep
Oh hear us when we cry to thee
For those in peril on the sea.

It was comforting and reassuring experience.

I stood overlooking the reef and had a lovely, broad and intelligent conversation with Bob. It was a pleasure to pass that brief fifteen minutes with him. 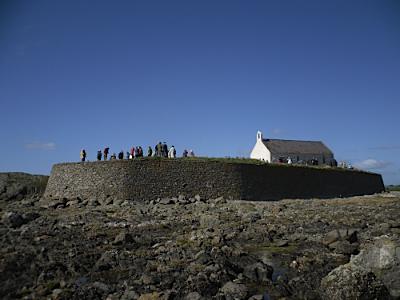 HISTORY OF THE CHURCH IN THE SEA

Thankfully for the local community in the Aberffraw area, it’s been a very long time since the walk across a causeway to the Church in the Sea was necessary.

St Beuno came to their rescue when his own particular brand of climate conscious Christianity to the village.

The church of St Beuno was built in the village in 1872 and it is the church for the Aberffraw parish.

However, it is the Church of St Cwyfan that’s interests me here. Located on the small islet called Cribinau there has probably been a church here since the 7th Century.

Inspired, if not built, by the man himself.

Mind you it must have been some mad romantic who would ever have thought of placing a church on Cribiniau to face the vicious Winter south westerlies that smack Anglesey to this day. Nonetheless, here it is. 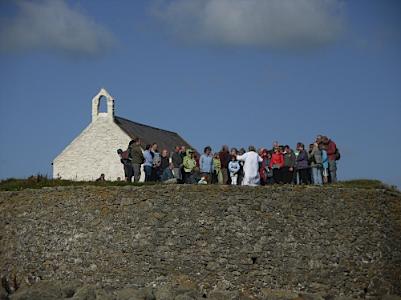 Yet, in a religio-historical reality, I imagine that many of the superstitious individuals lived an abject and pointless existence on Anglesey in those days.

Life was hard and anyone who was enigmatic and smart enough to address those sensibilities could convert them to any religion. The Christian religion fell on Anglesey with a fair zeal and vengeance between the 4th and 7th Centuries.

A good afterlife was probably better that the brutal and callous one they lived between dawn and dusk. They’d not heard of a Welsh speaking Russell Grant in those days.

If assisting in the construction of a church would offer some form of reward postponed, then I believe that volunteers would be aplenty.

The original church would have been of a simple wattle and daub construction and must have required constant maintenance. The church as you see it today is a physically truncated reflection of a structure probably in existence about AD 1250.

Caveat To The Above: The original church may not have had a name and it would probaby been inappropriate for the missionary to name the church after himself, rather than dedicating the structure to the glory of God.

It is more reasonable that it was named after the founding saint later. In this case, it would have been re-dedicated as such the stone building was first built during the Norman era. 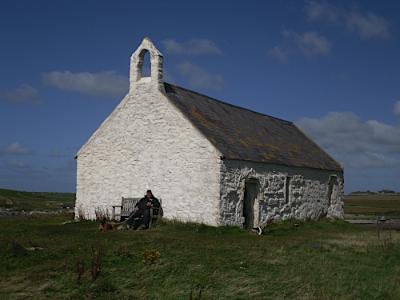 It is thought that Cwyfan lived between 498 – 618 AD and was a disciple of St Beuno and had a church built on Cribiniau toward the end of his life.

Like many Christian missionaries of that age Cwyfan settled in Aberffraw; however, little is known of his presence on Anglesey other than conjecture. Fundamental to his missionary work would be the creation of a church for people to gather and be educated in the Gospels.

The church was also a means by which a new moral code could be imbued in a large geographic population incrementally, region by region and over time. People have a tendency to disparage the missionary work of the Mormons, yet it is a living example within our own communities of how difficult missionary work can be.

Adopting to a more moral way of life means giving up the fun bits. During the 7th Century ‘fun bits’ were very limited.

A smart Christian missionary would adopt the existing customs and by a process of habituation and strengthening the ‘Fear of God’, thereby create a new received wisdom of how life should be lived.

Before I forget, Cwyfan was thought to be Irish. Cwyfan used to be a reasonably familiar name on Anglesey and it can be heard today. Now, there is an Irish version of his name, Coemgen or Kevin in English.

Now Cwyfan/Coemgen/Kevin is a recognised Irish Saint with his centre of operations just across the Irish Sea at Glenalough. 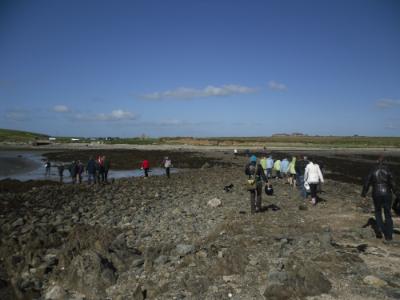 Pilgrims Head for Home Along the Causeway

THE SEA SHALL EMBRACE THEM

Take a moment to look to your feet as you walk about the islet.

The church has a graveyard! There a few stones left. The remainder have been lost to the encroaching sea over the centuries.

The image below is clearest on this page in demonstrating just how isolated and precarious is the existence of the Church of St Cwyfan.

Cribiniau is an anomally in this little bay eroded by the weather. While the beach continues to recede the islet remains thanks to hand of Man and lovely Woman.

The islet is of the same clay as the land that backs the beach. It is only the high stone wall that retains the insular integrity. I understand that such wall work is called a Revetment.

I spent an hour and a bit on and on the reef round the church of St Cwyfan and it left a pleasant mark on my conscious mind that remains even now.

In all honesty it’s not been an excellent Summer for extended periods of sunshine. So those periods we’ve had, however brief, I have made sure to get out there and charge my batteries for the coming of Autumn and the inevitable stormy and miserable early months of the year. 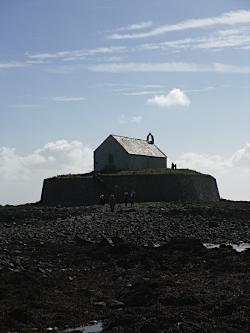 The Anglesey Coastal Path can bring you down to St Cwyfan’s Church from both the south and north. Standing on the headland just to the south of the islet you can view the mountains of Snowdonia marching to their demise at Bardsey Island.

In the middle distance you should be able to see the old lighthouse of Llanddwyn Island, with the wonderfully extended beach of Llanddwyn just beyond.

Just round the corner to the south – about a mile on the Anglesey Coastal Path - is the lovely beach of Aberffraw, worthy of your endeavour.

To the north is Cable Bay and the string of gems that are the beaches of Rhosneigr leading to Cymyran Beach.


To assist you, I have created two pages describing the Walks from St Cwyfan’s Church to Aberffraw Beach and to Cable Bay:

What Other Visitors Have Said

Click below to see contributions from other visitors to this page...

Do you remember a TV series called The Intruder being filmed at the Church in the sea in the early-seventies?

Do you remember a TV series called The Intruder being filmed at the Church in the sea in the early-seventies?

Definitely a Hidden Gem - St Cwyfan Church in the Sea

We were there yesterday Thursday,21st August,2014. I'm ashamed to say it but, having always lived in North Wales and for the last 30 or so years near …

Really that old? Not rated yet
Thank you for the fascinating essay about the St Cwyfan's church. I wonder if you could tell me what evidence there is for the church originally dating …