Anglesey Hidden Gem.com
Book Store
Books by the Author of this site 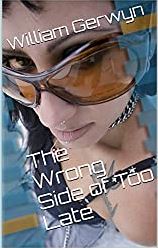 THE WRONG SIDE OF TOO LATE

The population of Centrum is dying because it appears to have reached a genetic dead end. In a population of 2 million barely a hundred children are being born each year.

Solution: Centrum Government insists that you have Sex. Guilt-Free Sex. As much Sex as you can manage. It's your civic duty to screw as many as you can of the opposite sex. So don't get het up about it. Just get on with it. It's your duty.

Problem: A birth rate lower than whale droppings is the last thing you should be worried about right now. Something bad is going on out there that's going to kill you.

And it doesn't give a damn about how good the Sex is.

Scroll down for more...

Anglesey Hidden Gem - The world is bigger, more interesting and much more profound when you can attach a name and a story to a place. With that thought in mind, I welcome you to my fully illustrated book about Anglesey, My Hidden Gem. This is very much my book, my stories – amusing, eccentric and quirky - because it’s all about my journeys and My Island home. Allow me to share and guide you.

So imagine rediscovering that part of your Soul you'd forgotten about while trying to be someone else. Leave your city driving behind and grab an ice-cream. Slow down and allow gentle, natural beauty to smooth your concerns to easy contentment...

These are Kindle versions of the books. Don’t worry if you don't have a Kindle device because you can download a file from Amazon that will allow you to read it on your PC, Tablet or Smartphone.  It’s easy.  Click below for more on this.... https://www.amazon.co.uk/gp/digital/fiona/kcp-landing-page?ie=UTF8&ref_=dp_kinw_kcpapp_1

THE WRONG SIDE OF TOO LATE

Problem. If they do not find a solution, they are both likely to be killed on the orders of the Cabinet Members who hired them in the first place. In addition, no-one seems keen on them solving the mystery, to the extent that someone is trying to kill them. Local politics and gangsterism is really messed up.

Ghyll and Freya are not fornicators. They hate their world. Both hope that Centrum will be destroyed and everything associated with it. The worst people to order to solve the problem.

Contrary to the remainder of Q2 society, neither of them could give a…

CLICK HERE OR THE BOOK IMAGE FOR MORE INORMATION...

The Suppressor of Wills is not yet awake; however, it soon will be, and there is a mad rush to find the three individual Keys that will lead to it.

Whoever controls The Suppressor will control the world by suppressing the will of all those who are in opposition. The rule of the species that once held control of The Suppressor fell away into decadence and debauchery, which is when the Humans rose to prominence.

What’s a Sheep to do?

CLICK HERE OR THE BOOK IMAGE FOR MORE INORMATION...

Recently adopted by yet another cat, William Gerwyn has lived in the heart of Anglesey for most of his life and has always valued the stories he has been told by his family.

In this book, William Gerwyn writes about local wisdom, both contemporary and those reaching back to great grandparents and their memories. While memory of a person’s physical presence is lost within a generation, their words and sayings can still be found in our daily conversations and observations on our world. Witty and barely credible, these are old words in new clothes covering topics of love, affection, sadness and easy cruelty.

“When it comes to the Milk of Human Kindness, the van doesn’t stop at his house.”

I'M WAITING AS QUICKLY AS I CAN

“I’m Waiting As Quickly As I Can”.
When you’re in a hole the best thing to do is stop digging’.

But what do we do? We carry on digging.

Why is that we can look at other people in trouble and identify what’s probably going wrong for them? But why are we so blind when it comes to sorting out where we’re going wrong? It’s the same bloody skill.

It’s all a bad habit. We know what’s wrong, but we deny it and hide solutions in the ever more complex and confusing emotions that we gather as a shield around ourselves. We just get tired and it’s all futile isn’t it?

I’ve found my best lessons in stories and conversations. Here are some of them for you in “I’m Waiting As Quickly As I Can”.

EBOOKS VERSUS PAPERBACKS - A DISCUSSION

'Given a Reason to Kill' presents you with a plausible template for understanding the internal and external forces which exhort many to exhibit behaviours considered as ‘Pure Evil’. These reprehensible acts can shockingly be justified as rational by those committing the crime.

Many of us find ourselves unable to understand how an individual can revel in the horror of carrying out acts beyond belief. Sadly, this is nothing new. Humanity has been here before and will be here again – all too soon.

Man is not a Rational Being but a Being who Rationalises. Therein resides our downfall...

William Gerwyn recently woke up to discover how old he was and was shocked. How on Earth did that happen? So many hopes and aspirations still unrealised because of commitment to and exhaustion from caring for family, friends and strangers.

He reviewed his situation and choose to walk away from his job and from people who were causing severe injury to his health and soul simply because they wished to. With a couple of degrees in psychology to his name he now sits writing, reflecting on his garden and despairing over his heavy-handed attempts at fine cooking. His friends are now more precious to him than ever and he is in a dilemma over whether to adopt a few cats or not.

William Gerwyn is advocate of laughter and of not over-thinking problems. He believes that we know the solutions to our problems even though we pretend we don’t. He has confidence in the unconscious mind for finding novel ways to bring the conscious mind to focus on solutions. William Gerwyn believes in the power of stories – the oldest and most powerful technology of all.