St David’s Day in Wales is annually celebrated on March 1st with Cawl a Chan (loosely translated as ‘Soup and a Song’).

Sadly, March 1st is not a Bank Holiday in Wales despite great efforts by the Welsh National Assembly and petitions of the United Kingdom Government. 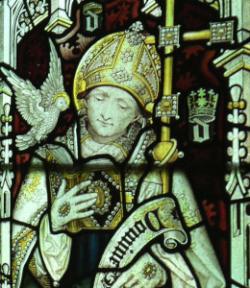 So for those who wish to celebrate the entirety of the Welsh Patron Saint's Day it’s a bit like Max Boyce’s rugby legends about Doctor’s Papers on Welsh International Rugby days. Ways and means.

St David or Dewi Sant as we call him in Welsh was born toward the end of the 5th Century, though the exact date is lost to the dim past and myth.

One particular myth attached to our Welsh National Saint is the he lived for one hundred years.

However, the day of celebration is a remembrance of the day he died in AD589. 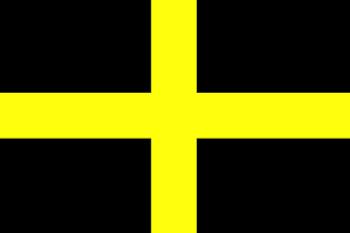 WHO WAS DEWI SANT?

It is a character of the legends that spring from as far back as the Christian onslaught on Britain the 5th Century that even the lowest born of saints was awarded royal attributes.

To add further nobility to this probable political association, it further alluded that Non was also the niece of King Arthur.

Curious this, as Arthur was probably a rank more than an individual. The first biographer of Dewi Sant’s life was Rhigyfarch in the 11th Century in his book Buchedd Dewi (The Life of Dewi).

Giraldus Cambrensis (Gerallt Gymro / Gerald the Welshman) wrote on the life of Dewi during his tour of Wales in the 12th Century.

Five hundred years between the death of St Dewi and his first biography would have rendered all significant characters from a putative better one of Myth and Legend.

What is curious about this time is that King Arthur had attained a legendary status, later to be immortalised in Sir Thomas Mallory’s book Le Morte d'Arthur completed in 1472.

Reflect on the history of Wales during that period.

Wales was under the yoke of one Royal House after another, suffering particularly under the ‘Hammer of England’, Edward the First. Beaumaris Castle being prime evidence of that oppression.

The need for a legendary hero was greater than ever. The retrospective association of St Dewi with Arthur would have been popular to the 11th and 12th Centuries.

Alliances in this form of marriage are not unusual even today.

Even though Prince William's Wife-to-Be, Catherine Middleton, is a ’Commoner’ - outside of royal lineage – she comes from a very wealthy background and of a ‘Ruling Class’ as it were.

(Please do not for a single moment regard this as a criticism of the beautiful young lady, Catherine.)

Unlike St Seiriol, St David made a bit of a reputation for himself across the Celtic communities of Britain as a great teacher and his dedication to his asceticism.

However, the legends attached to his life insist on his piety and gentleness.

St David is said to have been sustained by a simple diet of bread and herbs primarily and he would only drink water. Hence the name ‘Dewi Ddyfrwr’ or Water Drinker.

Even the most pious feel them prone to physical, emotional or spiritual weakness. St David was no different and it is reported that he would stand neck deep in a lake of cold water and recite from the Scriptures.

St David insisted that all in his monastic order share the same diet.

Contrast this with the monastic life in other religious centres across Britain. For instance, St Seiriol of Penmon Priory Anglesey seemed to have a food manufacturing industry that brought wealth and renown to his order.

For was not Puffin Island, (Ynys Seiriol – St Cyril’s Island) known to gastronomes across the whole of Britain as the home of the Pickled Puffin. 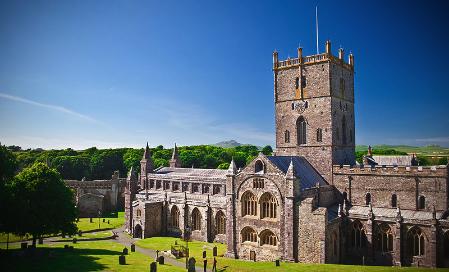 The Cathedral of St David, Patron Saint of Wales.

The Cathedral stands in Pembrokeshire upon the ruins of a monastic community at Glyn Rhosin (Glen of Roses) which he founded. 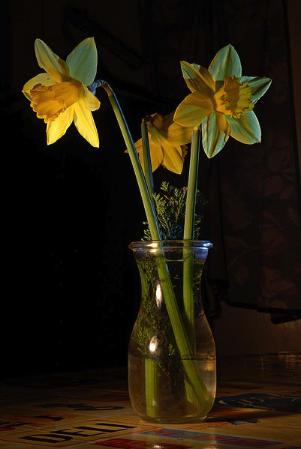 Those who choose to celebrate St David’s day wear either a daffodil or a leek. Aesthetically, a real daffodil is pleasing to the eye, while a leek in the pocket looks decidedly amusing.

I once remember one of my College lecturers turning up for a meeting with a big leek in his top pocket.

He was a humourless little man and I am to this day uncertain whether it was intended as symbolic or a joke.

It is alleged that at the Battle of Heathfield in 633 AD a monk proposed that the Welsh soldiers should wear a leek in their caps and helmets.

Why? So as to distinguish themselves from their Saxon foes in the thick of battle. 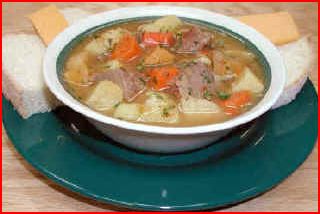 Otherwise known as Cawl this rich stew is the traditional meal celebrating the life and works of the Patron Saint of Wales.

These days the Cawl is eaten as single serving with crusty bread. In the old days, though, it would be a two-course meal with the broth being served first and then the meat and vegetable.

This is old-fashioned slow cooking at its best and will take you about two and a half hours.

In the interim you could always write melancholic poetry about your own 'Buchedd'.

1. Heat the lard in a large saucepan or flameproof casserole. Add the onions, carrots and swede and brown on all sides. Remove with a slotted spoon and set aside.

2. If using beef, cut into 4 equal pieces. Add the meat to the pan and brown on all sides.

3. Return the vegetables to the pan with the meat and add the bacon and herbs. Cover with water or stock and bring to the boil.

4. Skim the surface then reduce the heat, partially cover and simmer for 2 hours, stirring from time to time and keeping the liquid level topped up.

5. Add the potatoes to the pan and continue to simmer for a further 20-30 minutes until the potatoes are tender.

6. To serve - divide equally between 4 bowls, placing a piece of each meat plus some vegetables and broth. Garnish with lots of finely chopped raw leeks. Serve hot.

Very good re-heated. Traditionally the broth was served as a starter with the meat and vegetables served separately as the main course.