Llynnon Mill, this fine Anglesey windmill (or grist mill) was constructed across the Winter and Early Spring of 1775 and 1776 for the princely sum of £529 and 11 shillings.

In its day it was one of at least a hundred operational mills on Anglesey, if you count water mills, that milled corn, oats and barley.

Anglesey is essentially flat and the prevailing south westerly winds proved the viability of milling technology on the Island.

Llynnon Mill is the only fully operational windmill on Anglesey. The Swoosh of its sails sweeping past is simultaneously exhilarating and frightening.

You may be lucky on your visit for the miller to have set the sails to work. 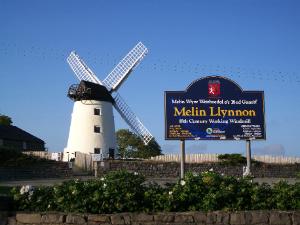 If it's a fine day enjoy a cuppa and fine cake at the tables outside of the delightful little mill café, the Llynnon Mill Cafe.

Open: Easter until the end of September

Meringues to Die For.

Or as my friend has it, "Meringues to dive in."

Sat here, please take the time to focus on the velocity (speed and direction) of the sail tips.

Now compare this to the relative speed near the centre.

I wonder how big a windmill you’d need for the sail end to travel at the speed of light.

Also, would it make a Whoosh! that you could hear, or would you have to come back later after the speed of sound has caught up.

Any physicists out there let me know, please. 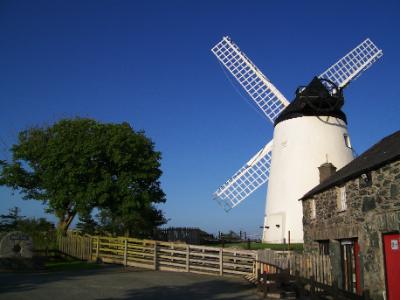 A BIT OF HISTORY ABOUT LLYNNON MILL

The original working grist mill finally fell into disuse in 1924 following storm damage in 1918. Apparently, it had struggled on for the last six years by maintaining the sail’s face to the southerly wind.

Damage to the machinery inside made any other directional operation. Anyway, the process had become fully industrialised by then and local need had diminished.

Llynnon Mill was purchased by Anglesey County Council in 1978. The County Council rebuilt and refurbished the grist mill over the next eight years and it was finally opened to an expectant Anglesey public in 1986.

Many a young Anglesey child has run him or herself dizzy around the mill, which would probably explain its remaining a popular place to visit by Island people. It leaves an indelible image on one’s memory. 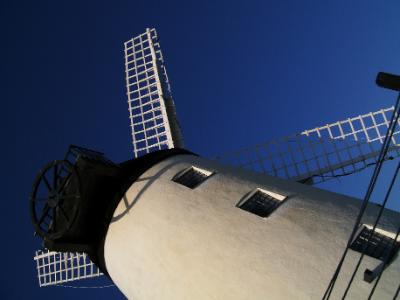 The first mills in Anglesey were constructed during the late 13th and 14th Centuries, with a report of construction costs being in the region of £18 according to a Newborough Bailiff.

I’m certain you will have read on my Beaumaris Castle page about the relocation of the entire village population of Llanfaes in order to construct the castle.

It is this abundance of natural resources of good quality soil that made Anglesey important for centuries. The Island was known as ‘Môn Mam Cymru’, the ’Mother of Wales’ or ‘The Breadbasket of Wales’ because of its capacity to produce wheat and bread flour in great abundance.

Anglesey was a valuable food asset for North Wales and thereby gained an exaggerated reputation across Wales.

The wind in the Newborough area comes straight onto the land virtually uncontaminated by topographic interference, directly up the Irish Sea from the Atlantic.

If you have sailed on an inland lake and then the sea you’ll know that land wind is blustery while sea wind is clean and consistent. Anglesey is quite flat, remember.

If you’ve visited Llanddwyn Island it is certain that you noticed the similarity between the Island’s disused lighthouse and Anglesey mills.

It has been proposed that this lighthouse might originally have been a windmill. Highly unlikely, though, considering its distance from the nearest farmland.

Caernarfon Castle at the Western end of the Straits completed the blockade. 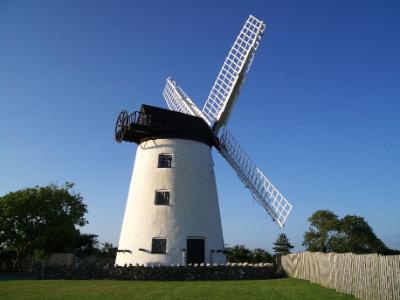 I buy a few bags of the wholemeal flower every year from the mill shop to make my own bread. I never use a bread-making machine either because I have discovered the process of making bread with my own hands deeply satisfying.

Because of my work I live mostly in my head and nothing is every immediately completed. Making bread has a definite beginning, middle and most tasty end.

The welcome in Llynnon Mill's little entrance shop is warm and generous and you will generally be asked if you have made bread with this wholemeal flour before. If not, you will be advised to mix it 50/50 with ordinary white bread making flour, otherwise the bread is heavy and your daily ablution will become regular and as heavy as the bread.

Respectfully, I do suggest that you make 100% wholemeal bread at least once.

Pain de la Campaign is great for soups and such, but if you want a bread upon which to crush a block of crumbly cheese then this solid wholemeal bread is ideal.

The flavour and texture are more intense. It lasts for ages, as well.

Special Advice: Use the flour well within the date written on the bag. 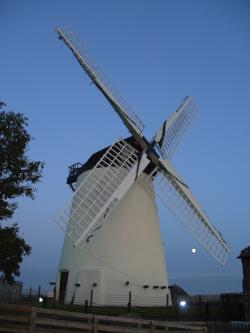 Why? Have you heard of weevils. Just leave a bag on your shelf for a few months and you’ll find the little beetles? perusing your lovely kitchen for grub.

Anglesey County Council bought Llynnon Mill in 1978, rebuilt it and set the mill to work once again in 1986.

They maintained the interior in an impeccably clean state; something that the old millers never did.

The old millers knew that spiders were an essential ally in keeping down the weevil population. So don’t be surprised by the spiders’ webs you encounter inside the mill.

For a look at the inside of this working windmill, Please Click Here...

There are a number of ways to get to Llynnon Mill. One is easy, another is a bit of a challenge and the rest demand a great deal of courage and highly-honed map readingskills.

Therefore, to avoid arguments in the car, I would recommend one of the following:

Respectfully, I now direct you to my Bodedern to Rhosgoch Drive Route. As described above this is a very pleasant rural route that will bring you to the village of Llanddeusant. Here you should turn left and drive for about half to three-quarters of a mile.

Return from Llynnon Mill to WHY ANGLESEY? page.