Why build a castle at Beaumaris?

During the late thirteenth century Edward I of England constructed a castellated ‘Ring of Steel’ across North Wales in order to subdue the Welsh.

When that was achieved these powerful structures were a reminder to the Welsh that they were conquered.

The last of Edward’s castles was constructed here in Beaumaris. 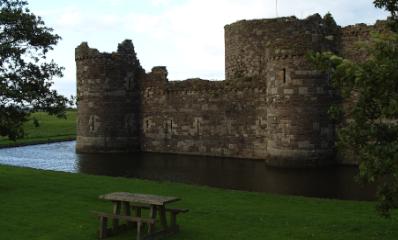 The structure was designed by Master James in 1283; however, it was not until the Welsh became dangerously rebellious under Madog ap Llywelyn that its construction was commenced in 1295.


HAVE A WANDER ABOUT 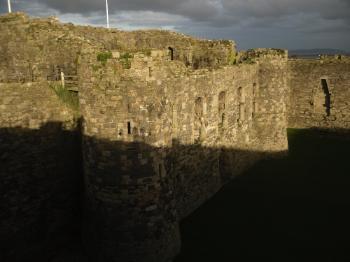 Master James was the consummate castle builder of his age, with his works stretching across Europe, England and Wales.

The structure of the Beaumaris castle walls was based on those formidable defensive structures of Constantinople (Byzantium / Istanbul).

This bastion of English military power was never completed though clearly it is a substantial structure.

Edward’s focus had switched to the destruction of Scots opposition under William Wallace and subsequently Robert Bruce.

All of this was an incredible drain on the Royal Purse because of the cost of English Hammer that he sought to bring to bear on Scots opposition. Although Edward managed to subdue the Scots, his objective of Union was not achieved in his lifetime.

All kings seek to leave a distinctive mark on history. It has been mooted that Edward sought to enlarge his realm and bring it all under the crown in his name because he feared that his heir lacked the character and strength.

His fear was realised because on Edward’s death his son, now Edward II, immediately withdrew the English army from Scotland. 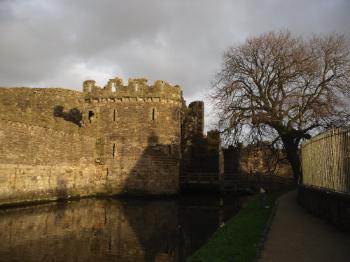 In 1303, in order to facilitate the construction and completion of the castle, the entire population of the village of Llanfaes was forcefully relocated to what is now Newborough (in Welsh, Niwbwrch). 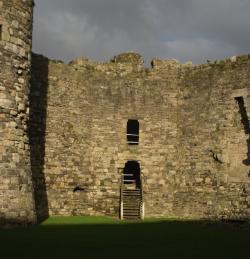 Master James set about the construction of Beaumaris Castle with a will and determination.

It is reported that over 2,500 workers were employed during the first year.

It is known that Edward was using up most of the Royal coffers with his dreams of conquest and unification.

It probably makes sense that construction continued for 35 years. Yet it remains incomplete.

This makes you wonder about how Master James constructed his castles.

It is apparent that he did not ‘start, stay and complete’ all his castles because this would have amounted only to a couple of castles in his lifetime.

Like ‘Grand Designs’ on Channel 4 one would have thought that he probably set a project manager to each and came by now and then to fine tune. This is not the case, because he took sole control over this entire project.

The management of the construction of Beaumaris Castle would have demanded enormous organisation, because at its peak about 3,500 workers were employed.

As an aside, modern theories propose that it took less than this to build a Cheops Pyramid.

North Wales castles, such as Caernarfon and Conwy can be described as ‘aesthetically pretty’; however, the most perfectly designed, most formidable and best defended Welsh castle was that at Beaumaris.

Though it was never completed - even after 35 years of construction – Beaumaris Castle remains an imposing, powerful, though ancient, military structure. Master James refinement of military necessity and psychological imposition of that military will demand a specific type of fortress architecture.

Click the above thumbnail image for a full image. 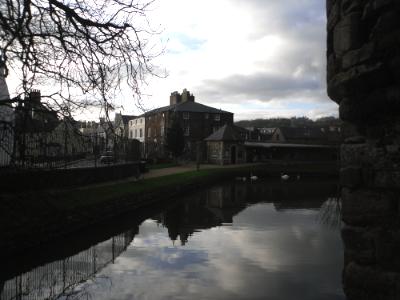 The moat is an obvious defensive strategy that was refreshed by the sea each tidal cycle of 13 hours.

The construction of Edward’s Castle at this particular point along the coast satisfied a number of demands for any experienced military strategist: 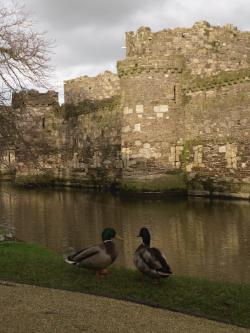 It denied the feudal Welsh access to the Anglesey breadbasket;

(At both of these strategic points the centre-channel draws near to the castles and the sandbanks at Beaumaris and Brynsiencyn were major shipping hazards.)

Tidal flow across what was Beau Marais (Beautiful Marsh now The Green) afforded direct access to the castle and the luxury of bringing food, troops and sundry military supplies right to the South Gate.

Sixteen regularly placed towers would lend comfort to an engineer’s eye for symmetry and provide a murderous challenge to any ambitious Welsh prince or feudal lord.

Cannon was not an option at that time in the 13th Century.

Most major assaults on castles would have been conducted with devices such as Trebuchets which were catapults that could hurl 400lb rocks against fortress walls.

It was highly unlikely that a rebel Welsh force could ever mount such a major assault on Beaumaris Castle. 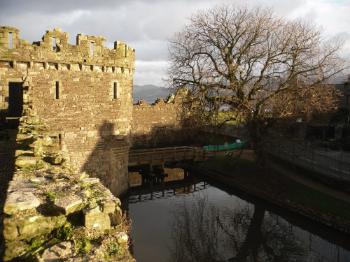 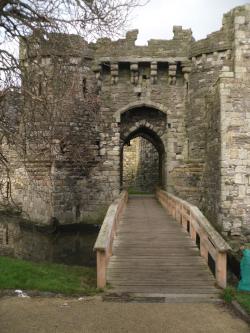 So we are discussing head-on attacks by massed ranks with siege ladders under the cover of their archers.

An assault of this nature was never launched against Beaumaris castle; however, the design of the exterior walls would render such an assault suicidal.

The many 'arrow slits' and ‘murder holes’ covering entrances afforded safety for the defenders to pick off attackers with arrows and impunity.

Then to add further injury to the insults they might spitefully pour boiling oil on some poor grunts who came close enough.

If an enemy did ever manage to break through this first defensive wall, then the internal structure would once again offer further murderous challenges. 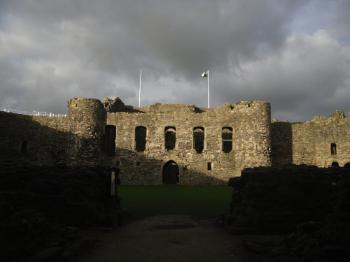 Marching across the bridge the dock is to you right, clearly well defended from above and by a series of ‘murder holes‘ that would concentrate the mind of any wishing to storm the castle.

The seaward entrance is narrow, which in strategic terms means that only so many could storm that entrance. Narrow access would slow them down to become an easy target in an architecturally and militarily contrived ‘killing field’.

Ahead of you is the entrance into the Inner Ward. Compared to the outer ring of defences the walls here are massive in height and – as you will soon learn – very, very wide and deep. 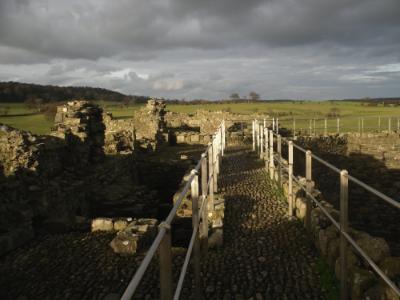 ENJOY A WANDER ABOUT THE PLACE

That’s most of the history out of the way so now just give way to following your nose about the internal castle walls.

On your right at the bottom of the east wall there is an exhibition on Castle Building and Edwardian Castles. Please do take the time to read the posters and to sign the Visitor’s Book.

Though well set-out, this room reminds you just how cold it must have been to be a regular soldier ‘grunt’ defending the castle against the revolting Welsh (I’m one of them). 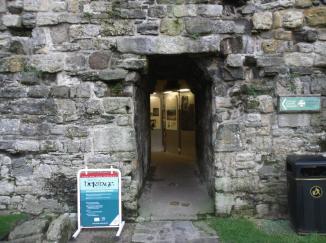 Constable of the Castle - £40 per annum 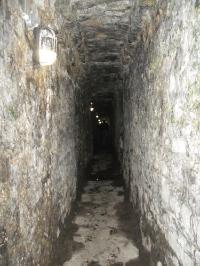 The corridors are fascinating in that they would only allow one person at a time to fight here. Bodies would build up very quickly and be an obstacle to any progress.

Such is the military consideration with which the castle has been built that one or two of your mates could smugly fight off an army launching a major assault in single file.

You could make use of the seemingly endless number of toilet chutes while you waited for your turn to bravely hold off an entire army.

Strangers to Harpic
As you wander along these corridors please take a moment to extend your olfactory imagination. The smell in these places must have been appalling and there was a desigated local, who was in charge of shifting this mass of excrement away,

I'm certain that he and his merry, smelly band bore nicknames like, 'Cr&p Collectors' or 'S.H. One T. Shovellers'.

Walk about the castle on top of the fortifications. There a few places that you're not allowed to venture because of safety considerations or 'works-in-motion'.

The views across the town lends a new perspective while the glory of Snowdonia imposes itself on your consciousness.

I HOPE YOU HAD A LOVELY DAY AT THE CASTLE

If you've stories or thoughts you'd like to share about your trip to Beaumaris Castle then I'm sure we'd love to hear from YOU.

Please allow me to tanslate from the TAGGART Glaswegian tongue.

"I do believe that there has been a murder. Don't you know."

I apologise that I cannot remember the reference for these details and hope no offence is taken for any accidental or unintended plagiarism.

In 1643 Thomas Buckley Esq. was appointed the Constable of Beaumaris Castle. He was later elevated to the rank of Lord Bulkeley.

Now, the son of Thomas was Colonel Richard Bulkeley who was killed during a duel with his step-father, Thomas Cheadle on Lavan Sands one cold morning in 1650.

The duel was fought as a matter of honour to seek revenge for what Richard believed was the murder by poison of his father by Cheadle.

Cheadle may well have thought himself now safe having dispatched both father and son.

However, Cheadle was hanged in Conwy (Conway) Castle in 1653 for the murder.

Clearly, whatever patronage Cheadle might have accrued before then was inadequate to save him.

Stand atop the castle walls above the South Gate gaze out over the Lavan Sands between you and the Carneddau mountains of Snowdonia. 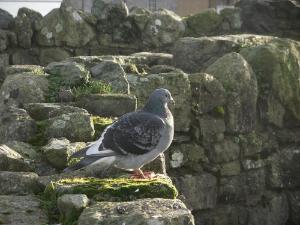 Now, extend your imaginative eye back 350 years to that fateful day when two men fought until one had to die.

Backwards and forwards they struggled across those accursed sands until a fatal wound was inflicted.

A man fell and his seconds rushed to him to the sound of loud cheers from Cheadle's supporters.

Any sense of victory that might have prevailed that day was certainly short-lived.

Reflect on the old truth that, you can choose your friends but not your family. 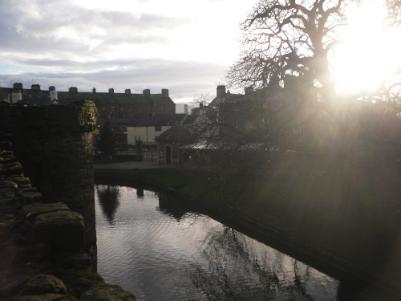 Before you wander off to another page, scroll down a little bit and look at this beautiful image I captured on the Menai Straits in late January.

There are more lovely blue images to see. Click Here to see them 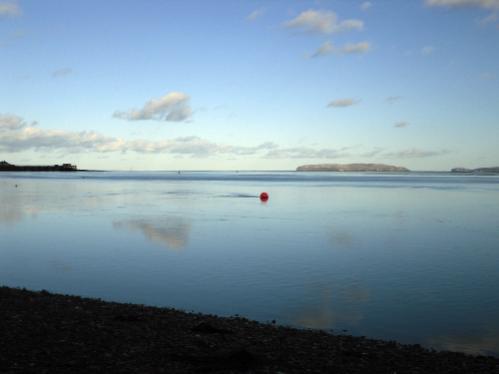