Me among my own Tribe.

A mild morning, yet a chilly wind, but the sun shone, it was full spring, Y Gwanwyn (Barddoniaeth gan I.D.Hooson).

The streets of Llangefni void of all cars, silent and near deserted. St.Cyngar's church bell rang clearly from Nant Y Pandi, aka The Dingle, that long, wide glen, split by the avon Cefni.

The local chapels were near full then, people in their best, ladies and girls in nice refinery, Bibles in hand.. Yn yr iaeth Cymraeg hefyd (In the Welsh language as well).

Glorious singing came out of the open door of Eglwys Christmas Evans, Capel Penuel. Oh I hear it now..

Pompous ? - Not a bit. These were decent, humane people. Conservative, maybe, but the first there in a crisis or emergency.

I remember a young man, who somehow fell off his motorbike, his left foot went round inside-rear wheel, right-side! Godly men & women came out of cracks in the ground.

A woman held him in her lap, bless her. Men, real men, got hacksaws, bars to bend the frame, to release the agonising pressure, that shocked the rider, so pale. The rescuers kept level heads, spoke with a dignified, reassuring calm.

As individuals, who would guess they were these types. Yet, they were. Despite the drama, it is this feature of the modest commitment, and cool actions, that moulded my conclusions. That in a time of crisis, the people of Llangefni were good to be among.

Gordon, you're a decade older than me, but I had the good fortune to enjoy that period that had values ingrained in it from the hardships before the War.

Your story about the injured motorcyclist epitomises that generation when people stepped forward in a crisis, not back.

I believe it reaches back to a time when all people were equal in a sense. Capel (chapel) education and ... here's a word I don't think you've heard in a long time .. Cymwynas

What is 'Cymwynas'? Well, the reward is not gratitude after helping out. The reward is being given an opportunity to help.

There's plenty of that still in Llangefni and Anglesey. It's instinctive in us Welsh and other peoples who have collectively seen hard times.

Bless you and your Tribe.

PS Below is an image of St Cyngar's Church today. 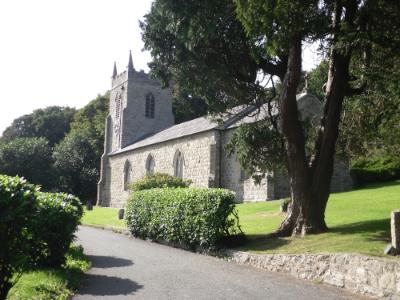